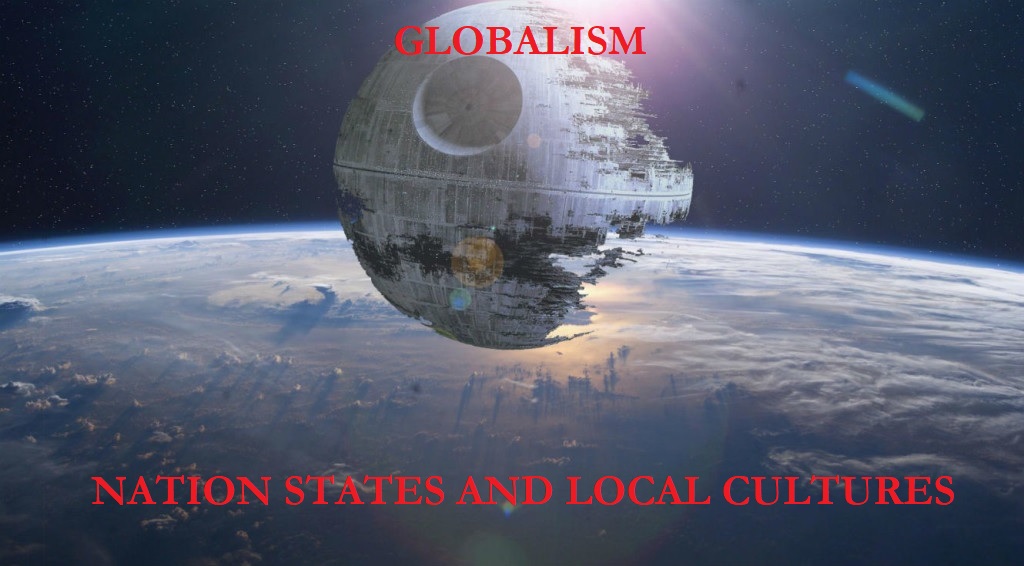 Civilisation I believe is at a crossroads. The globalists’ road has a stench that we can smell from the crossroads. Their dystopian future has been designed for far longer and in far more detail than anyone who has not researched it would ever imagine. It is no secret, no paranoia, and is documented in the public writings of the UN, the WEF and many more NGOs and private clubs of oligarchs. It is already impacting the lives of billions of citizens. It has long been designed in plain, documentable sight, by a complex network of NGOs and supra-national institutions and in essence private clubs of oligarchs. At a governance level covid is merely an accelerant to the super-scary UN Agendas 21 (signed in the 1990s in passing) and Agenda 2030. I won’t be covering agenda 21 or agenda 2030 – there is plenty of high quality material out there. Suffice it to say that the bland Blairite words of the UN website – sustainability et al – cover ideas of creating a future so dystopian that few science fiction writers can have imagined it. “They will own everything, have all the power and they will be happy” we will be reduced to little more than farm animals in their eyes, banging the rocks together to create a spark when the lights keep going out as our Dear Leaders sprint towards net zero.

I have changed my view on going back to the old normal as opposed to the oligarchs new normal. I used to think that was a good idea. However the increasingly tyrannical actions of major governments – and I am not just talking re covid here but in information management that would have impressed Stalin, Mao or Hitler, in actions to stop protests (and in a brilliantly recursive fashion stopping protests about changing the rules on protests), but also in lethal laws in the UK which allow state agents to break any laws they like. Their almost complete death star has already destroyed nations, traditions and long-fought hard-won gains such as liberty and freedom

Yes there are many elements of old normal which are essential to revive – freedom and liberty uppermost – our ancestors fought so so long to bequeath those to us, we would betray not just them but our children and grandchildren if we were the generation that blew it. However and this is the key to my change of thinking we cannot roll back the clock knowing what we know now. To sketch a couple of pictures on a whiteboard it would be like your house falling down and whilst you and others argue about why you just wish to go a few years back when it was still standing. But what if the reason for the collapse was woodworm and dry rot? You would just be going back to a situation where the house was about to collapse around your ears. Or using star wars as a metaphor your nation, your planet has been struck by destructive beams – going back a few years merely takes you back to the period where in relatively low key fashion a death star was being assembled above your head.

So to me there is no going back. In simple dualistic terms we will travel down the so-called Great Reset, more precisely the Global Oligarchs Reset path or down the people’s reset path. In quantum terms, more complex than dualism of A and B the near future will end up being some quantum superposition of these two states with the wave function only collapsing to one path in several years time.

The first task is to have a better understanding of what Globalism  is. This magnum opus episode is divided into 7 sections:

2) Non-Covid Examples Of UK Tyranny – there are many totally non-Covid-related Bills being passed in the UK Parliament (and elsewhere) under the cover of the Covid smokescreen.

3) Power, Persuasion And Democracy – dialogue about global governance is generally conducted without a deep understanding of the nature of how power works in human societies, a myopic view of a century of the development of ways to convince the masses to buy (be it a worldview, a political party to vote for, or a product) and naivety about the systemic flaws of  we call (but the Athenians never would) “democracy”

4) The Religion Of Totalitarianism – those of my generation lived through the USSR and Maoism and were immersed at school in education about Nazism. These days that is ancient history. Even those in the former eastern Europe need to be over 33 to have been alive in the days this was part of the USSR and obviously rather older to have had any real feel. As such there is a deep lack of understanding about the modus operendi of totalitarianism and in particular its need to conquer and control not just citizens behaviours but their thoughts and beliefs and to program them for the regimes convenience. In this section we examine various thinkers who have written on this topic over the past century.

5) The Origins Of Globalism – many people have only a fragmentary understanding of the long development of globalist rule and how it has been aimed for decades at undermining the nation state and local culture to ensure that the world is increasingly run from above whether covid, climate, immigration, control of speech and many more topics. We also have a look at how the manipulation of local culture and indeed dissing thereof is a key way of moving people from being citizens of states with long traditions and cultures to rootless consumers following whatever are this weeks diktats of wokism that ever changing pseudo-religion the only one to entirely lack compassion and forgiveness.

6) The Structure Of Globalism – many people think that globalism is a vague concept, or one for the paranoid or relies on speculation as to which unseen forces – clubs, institutions, families, people – are pulling the strings. Whatever happens behind the scenes those on the stage are already powerful enough. Furthermore with the recent Global Public Private Partnership (the rules-based system in which they enact policies decided centrally from above) there is now a nice simple organogram (see below).

7) Outro – Reasons To Be Cheerful  – despite all the challenges I conclude with reasons to remain optimistic. There is quite some struggle on people’s hands to wrest control away from undemocratic forces but in the end the people will win. Despite all the negativity both from those who are in fear of a virus and those who are in fear of their governments I conclude with grounded optimism and reasons to be cheerful as, to quote the six-times 19thC Prime Minister Gladstone:

“The Resources Of Civilization Are Not Yet Exhausted”.

An excellent GPPP organogram (the modus operendi of globalism) from What is the “Global Public-Private Partnership”? Iain Davis 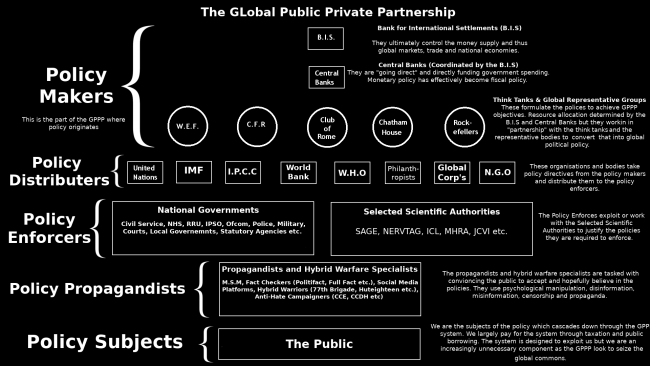