Nationwide is the largest Building Society in the world with 15 million customers, 1 in 4 UK households have an account, which makes over £1bn profit per annum and is entirely owned by its members (customers). If it were a company it would be in the FTSE50. 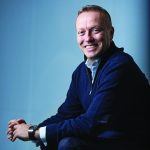 In this wide ranging conversation Tony Prestedge discusses how mutuals see IT – its an interesting combination (to oversimplify) of “much as everyone else” with a very different flavour – an organisation serving just its customers and no shareholders has a very different ethos which runs through the discussion like a stick of rock.

Tony emphasises that the digital age presents an opportunity to bring the human being back into banking which complements the usual narrative that the more computers and less humans the better.

But what does this mean in practice – especially knowing that Tony lead a huge SAP implementation so is intimately familiar with the coalface reality of huge IT systems as well as the more digital face of IT?

He also shares with us which types of Fintech Nationwide would like to deal with.