Where money in major economies is and where it is going is very concerning right now – look at the list of issues in the episode title, let alone the impact of the ongoing globalist putsch and UN Agendas 21 and 2030. This is a topic that will affect not just FS but the lives of everyone we all know we are more than overdue a dive into this essential topic. In particular we end with practical investment/monetary strategies to survive and thrive in an age of – inter alia – serious monetary risk.

I have been looking for a guest to talk about this for over two years there being some polarisation between the ~ “it’s all fine, needs the odd tweak” and ~ “Jacob Rothschild owns all the central banks and tells them what to do” camps. Mario is someone who being a long-term FS-er himself understands FS and markets deeply but also as a consequence of deep understanding and deep study has for some time been raising the red flag for some time. It is worth noting that all fiat currency systems have eventually collapsed. There’s a simple reason (before we get into civilisational collapse and venal politicians angles), as Graeber points out in his magnum opus on Debt if everyone repaid all their debts to banks there would still be an astronomical amount owed to the banks simply as when banks lend money they create that money but do not create the interest margin they charge. Fiat currency is thus a Ponzi scheme.

In the UK it took 300yrs for the money supply to reach £1trn but only 8yrs to go from there to £2trn and another 4yrs to reach £3trn. A dollar a century ago is worth something like 2.5 cents now and as Charlie Munger the veteran Chairman of Berkshire Hathaway said recently “I think the safe assumption is that over the next 100 yrs the currency is going to zero”. 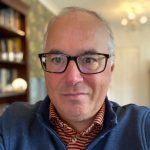 Mario has a very successful YouTube channel since 2015 where he is better known to 60,000 subscribers as maneco64 “the home of alternative economics and contrarian views”. And just in passing contrarian has a special meaning to us fund managers it doesnt mean your stroppy teenager who disagrees for the sake of it but rather long-term proven investment wisdom that you don’t make money by agreeing with the market. Rather to make money you need to stand against the current consensus.

Money is naturally at the heart of FS but most FSers don’t really understand what it is (they leave that to their treasury departments). Furthermore a 2014 Bank of England publication stated that the nature of money is widely misunderstood including in one important respect even in university textbooks (!).

But money isn’t just something of concern for FS folk. As John Kay notably explained when he was on the LFP, Finance is like a group of guys going into a pub and gambling with one exception namely that the outcome of their game extraordinarily affects everyone’s life outside the pub. That’s super-weird when you come to think of it.